HTML Hypertext Markup Language. This language can hardly be called programming, HTML is exactly the markup of the document. It stands for HyperText Markup Language. HTML is interpreted by browsers and the resulting formatted text is displayed on a computer monitor or mobile device. There are several versions of markup, common versions 4 and 5.

HTML prior to version 5 was defined as an SGML (ISO8879 Standard Generalized Markup Language) application. HTML5 specifications are phrased in terms of the DOM (Document Object Model). The HTML5 standard was finalized in 2014, but browser support was introduced back in 2013. HTML5 introduces many new syntactic features. For example, <video>, <audio> и <canvas>, as well as the ability to use SVG and mathematical formulas.

HTML was created for the exchange of scientific and technical documentation, suitable for use by people who do not know the layout. The language coped successfully thanks to a small set of structural and semantic elements - descriptors. Descriptors are also called "tags". With HTML, you can easily create a simple and beautifully designed document. In addition to simplified document structure, hypertext support has been added to HTML. Multimedia capabilities have been added in later versions of the language. 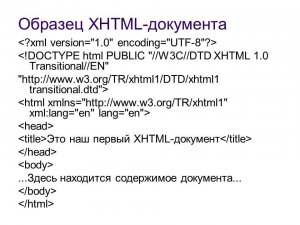